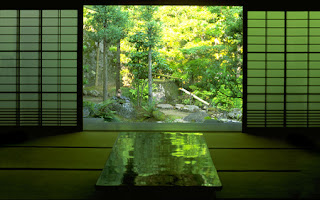 Yet another truth Cerutty taught concerned the benefits of keeping all things "simple." He writes quite a bit about this subject in his book, Be Fit! Or Be Damned! His most successful student, Herb Elliott, once said that the ideal life of an athlete is one of simplicity. Keeping with that theme is the following, perhaps it is relevant to you or someone you know.
Ah,to simplify,the new buzz word,the bumper sticker,the popular subject of articles in a variety of glossy mags.  To simplify means more than just cleaning off your desk or getting rid of accumulated "stuff". When you truly simplify it effects every aspect of your life; this includes something as seemingly innocuous as what and how much you eat, to how you spend your time,what you buy and don't buy,where and how you live and what you do with your body.There are more aspects to simplifying which will be discussed in future posts as well as the ones I've mentioned above.
Those desiring true peace and contentment must begin the process of simplifying.There is no other way to go about it.
Consider the following:
At the start of the day do you feel that the majority of your waking hours are already committed to doing something or being somewhere? I am including your "days off" here also.
Could you take a job tomorrow that was more to your liking but paid 5 or 10,000 dollars less a year?
When was the last time you spent more than two hours in the woods or a park?
When was the last time you were in an area that was quiet,meaning free from phones,televisions and radios?
Are you overweight,fat?
Do you drink too much alcohol?
Do you eat too much?
Do you eat denatured,unnatural foods?
Do you take what they call recreational drugs,most notable of which is marijuana?
How much time do you spend in front of the television or computer during the course of a day?
Are you preoccupied with watching professional sports?
How often do you read a book.
Do you exercise,if so,how much,how often?
Believe it or not the way to true peace and contentment has alot to do with the questions I just asked.
You will see this as the days pass.
Posted by Dave at 7:14 AM No comments:

Discern and Validate All Things


"To my mind, the greatest mistake a person can make is to remain ignorant when he is surrounded every day of his life by the knowledge he needs to grow and be healthy and successful. It's all there. We need only to observe, read, learn...and apply."
Paul Bragg

To that great quote I would add this---another big mistake people make is to hold onto to their preconceived beliefs on health, training and nutrition, or anything else for that matter, without having personally studied the validity of those beliefs. This type of laziness can lead to failure, ill health and worse. Read everything with a discerning mind. Accept the fact that you may find that your "pet" beliefs are not correct. This was a core Cerutty teaching.

My Awakening: In the End, It's All About Body Building

There was a time, now many years ago, that I believed long distance running was the be all end all as it related to achieving ultimate physical fitness and health. When I say long distance running, I include things like hill and interval training as well as racing.
I began racing as a youth of 8 years and continued until I was 64. I raced A.A.U. Developmental meets and ran cross country and track in High School. I did very serious training and mileage from 1979 through 1993, maybe 94'. After discovering the teachings of Cerutty towards the end of the 80's, I tried to run and race as much as possible in the parks and on the trails. During this time I raced distances from 8K to 50K, primarily on The Finger Lakes Trail System. At that time there was no doubt in my mind that I was a superb physical specimen.I was confident of this because I felt good and all the running literature I read confirmed my belief.  I was only partly correct, in reality I was a superbly conditioned aerobic/anaerobic athlete. I say this because I had not personally put all the pieces together as it pertained to reaching optimal physical health and conditioning. The missing piece to the puzzle was weight and strength training. I had chosen to ignore Cerutty's teachings on the necessity of weight training for runners and all athletes because....well...probably because of laziness. That was one teaching of Ceruttys' where I preferred to stay in the Arthur Lydiard--distance runners don't need weight training camp. So, what got me to come around to recognizing the benefits (understatement here) of lifting weights? Rereading Cerutty for starters was one, plus taking a Fitness Trainer course where the author of the textbook, Dr. Fred Hatfield confirmed what Cerutty had taught in addition to a few other things. Not the least of which is that weight/strength training helps delay the loss of muscle and testosterone that comes with aging. And before you readers out there think I am referring to just the "old' guys like me, may I remind you that diminishing T and muscle loss begins occurring way before you hit my age. Emphasis here on way before. But, irregardless  of your age, the benefits of weight/strength training to most all systems of your body are well documented. In the final few paragraphs below, Cerutty writes convincingly of what happens when runners and others incorporate weight work into their training regimens.
So what am I getting at? What I'm getting at is that to be complete as an athlete you must build the totality of your body, you must be a body builder. When people see the word bodybuilding they usually picture guys that are posing and showing off their muscles in pro competitions, which are at least in this day and age, the result of training as well as taking copious amounts of growth stimulating and other types of drugs. That is why I separated the body from the building, what myself and others advocate is vastly different from what comes to mind when you conjure up the word bodybuilding.  Body building is the complete way, the best way, to achieve your goals in athletics and life. Body building includes aerobic and anaerobic work as well as other disciplines.  More to come on this subject in the future.
Below is an excerpt by Cerutty spelling out, like only he can, the benefits of weight training for runners and other athletes. It was first published on my Stotan Runners Facebook page not too long ago.


Percy Cerutty, from his book, Athletics: How To Become A Champion(1960), writes about the benefits of weight and strength training all athletes.The following was written in 1959.
"Summed up, the whole purpose of weight-conditioning, as any form of conditioning such as running the sand-hill, is to acquire enhanced 'power' in order that we can do a thing more powerfully, faster, better.
Great strength, properly acquired, makes for quicker reflexes, greater agility, longer stride, more endurance(since great strength can be parcelled out in a short terrific effort--or a longer easier one).

We have seen the benefits of strength training as witnessed by the performances of gymnasts and tumblers and athletes of other sports. It (strength training) is now used by golfers, tennis players, pole vaulters and other specialists, all who find they have greater control, resilience and power at their command."
To those who dispute the benefits of strength and weight training, Cerutty has this to say--
"Nothing could be more fallacious than the statement that those who are weight conditioned will become muscle bound or slow in movement. Weaker types who profess this and those who offer watered down training concepts, tend, by the very constitution of society, to attract a greater number of followers--the many being weak rather than strong, negative rather than positive. Again, it is how we know them."