Work Versus Working Out 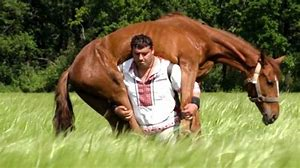 Cerutty railed against taking the easy way out physically and mentally. He wrote, in so many words, that the ideal life was one filled with challenges that were to be met and overcome. Jack Donovan has some thoughts on this and maybe it can serve as a wake up call for many of us.
"When I am doing a job that is truly tough and physical, I think of all the people in the gym paying personal trainers 60 bucks an hour to make them do squats with a 12 pound Nike medicine ball.
I think of all the schmucks doing lateral raises on Bosu balls to "activate" their "cores".
"Working out" is a substitute for work. It's forcing your body to do, what it's made to do. Modern life provides fewer and fewer opportunities to do real work. Hard work.
The next time you have the opportunity to do real work, take it. Take the physical challenge. Do the work. Don't try to make it easier so you can work "smarter."
It amazing how lifting heavy shit up stairs activates" your core."

Random Thoughts While Out On a Run

From the archives but never published on this Blog.
I'm sure you can all relate to how your mind wanders, ruminates and thinks about a variety of things while out by yourself on an easy run. As someone said, and I have mentioned this previously, "I do my best thinking when I'm running."
What follows are some thoughts I had while running down the beach the other day.
1. It seems that as each year passes I see more people,men and women, with bigger and more numerous tattoos covering their body. It's my belief that most of these people would be better off working on their physical condition instead of decorating their bodies with tattoos that fade and age very badly.Heaven knows, most people I see need to do some serious training.
But then again,conditioning takes dedication and commitment.
2. What's with the recent obsession with exposing Lance Armstrong as a drug cheat? Granted,my knowledge of professional cycling is not extensive but from what I understand is that no one reaches the upper echelon of this sport without some type of "enhancement." I am not condoning drug use but lets admit what goes on in their world..
With that said, you've got to appreciate Lance running 2:48 in his second marathon while running fewer miles in training than I'm sure most of us did before ours'.
3. Put the cellphones down! Forget the safety warnings, I was training on the trails last weekend and some of the other runners were wearing them during their run. Others went to their cars looking to check them as soon as the workout was over. At first I thought they were going to get water.
Give yourself a break,that's part of the reason for getting out there in the first place.
4. I don't find many interesting articles to read in Runnerworld magazine but enjoy many of the things they post and offer on their website.
5. Most of you are probably too young to remember but the yearly U.S. vs. U.S.S.R.(Russia) track meets held yearly in the '60's were riveting.This was a time when the "cold war" was going on between us and them.Pride and nationalism,as well as tremendous competition captured the whole nation's attention. It surpasses any type of competition you see in the Summer Olympics these days. It was high drama. Someone should write a book about those meets.
6. A nice thing about the barefoot, minimalist shoe trend,besides more business for the companies, is that it validates what Lydiard advocated many decades ago. Arthur said runners need light,flexible shoes, not the "gumboots" produced by most of the companies. He also said that the shoes you train in should be no different than the ones you race in. Remember the school of thought back then that said you train in the heavier shoes and race in the light ones?
7. As a coach and runner I can't help but gravitate towards observing other people's running form. The most common mistake I see is, runners don't relax their shoulders. They need to loosen them up, drop them. Too many hold their arms too high which causes their shoulders to raise. This becomes more extreme and noticeable when the runner is tired or trying to go fast. I always say, drop your arms down to your sides, feel your shoulders drop and take it from there. Adjust accordingly.
8. I often recall these words: "there is nothing new under the sun."
I believe this applies to training in all sports. The fundamentals of training must be observed. Fundamentals that are in synch with our anatomy and physiology where we recognize the need to introduce more stressful work progressively. Only after the groundwork has been laid by "easier" training then do we step it up. If you think I am stating the obvious then I would suggest observing running coaches for starters, especially high school ones.
Ignore the hucksters that are trying to reinvent the wheel.
In closing--Be different, and the difference--"Dare to Be a Daniel."