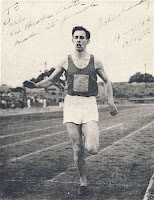 For most of us, Christmas always brings back a flood of memories from years past. Hopefully, they are good ones for all of you out there and you are in the process of creating lasting memories this year. As kids, we at one time or another had our lists of what we wanted for Christmas. What follows is my grown up Christmas list. In no particular order:

1. I want running shoes that are the same year after year. Here's what I'm talking about and I'm sure many of you can relate to it: I've been buying Nike Pegasus for several years, I always get last year's model so I can get them cheaper. Each year they are changed in some way,the 27's I bought were,at least for me, negatively different than the 26's I bought the year before. The 25's were great and the 26th Pegasus' were OK. The same applies to the Asic Tigers' that go up in # each year,some are excellent one year and some are just plain bad the next. And now that I'm on the subject of shoes, what's with the, "shoe runs a half size small" warning? Right or wrong,I always get the feeling that this is a red flag as to the shoe's quality.
2.I want a truly great running novel to be published,one that incorporates the essence of long distance running. By essence I mean the sometimes hard to describe quality of distance running that causes some of us to have such a passion for it. Unfortunately, running novels are too often about someone going through various trials and then eventually competing in a national championship or the Olympics. You know,very formulaic stuff as some would say.
3. I want Yiannis Kouros' book to find an English language publisher. Let's see,the greatest ultra-runner of all-time,unquestionably,and he can't get an English language publisher? What is wrong with that picture? I will temporarily step out of my, "this is not a vanity blog" policy and say,in the 90's I attempted to find a publisher for his book,at his request, and was stunned by the lack of interest I encountered. It all basically came down to one problem, they didn't believe it would sell enough copies to warrant publication. For those who don't know the phenomenal personal records, and number of records Yiannis has set, do a search on the web and you'll be astonished. Begin with his record of 303km in 24 hours for starters.
4.I want a charismatic American born long distance runner to emerge who is able to compete with the best in the world. How 'bout another Pre,Shorter,Rodgers,Benoit,Slaney, or Salazar for starters? With this emergence would come a renewed interest in distance running in the U.S. Oh yeah,send along another charismatic coach like Arthur Lydiard,Bill Bowerman or Percy Cerutty while you're at it.
5. I want one more season of optimal running fitness and ability to race in peak form. That means no injuries and no interruptions in training.Come on, it's not as if I'm asking to be like the otherworldly and phenomenal Ed Whitlock.
6.I want new and challenging places to train.Preferably courses with trails and lots of hills that go on forever. If I must run on the roads may it be ones with minimal traffic and varying degrees of elevation.
7. I want a great running mag that I look forward to every issue that comes out.Remember when you used to anxiously await the arrival of a new issue of your favorite magazine? I do. You know what I'm talking about, a mag that has to do with distance running, not one that is filled with articles on cross-training,food,diet,dressing for bad weather,most beautiful marathon courses in the U.S., and 300 pounders that lost weight and have run marathons. Hey, I'll settle for an existing running magazine taking a small part of each issue and republishing their archived articles,interviews, and profiles from 30+ years ago.
8. I want more athletes like the one pictured in today's post,John Landy. Men who are not only great athletically, but men who possess intelligence,sportsmanship, integrity and dignity.Who hasn't read enough of the boorish,self-centered athletes from different sports that seem to predominate the athletic world these days? By the way,if you don't know much about John Landy,read the Wikipedia profile on him for starters.
Posted by Dave at 9:05 PM 1 comment: 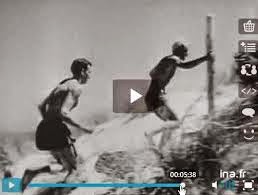 "Too many merely train; they have no considered plan. They aim at little consciously and wonder why they get little spectacular improvement--perhaps fail to get improvement at all! Such experiences are due to a lack in the 'intelligence department' of the athlete. He is not alerted to his needs. he wanders through his training tasks somewhat aimlessly. His is the approach of the zombie. Athletics teems with them.
Cerutty always stressed that a truly serious athlete must be a thinking athlete, one who is working his brain as well as his body.
Posted by Dave at 6:30 AM 1 comment: 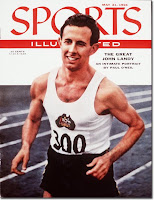 "Little or no training should be done on the bitumen or concrete roads.I am one who does not believe that the body can ever get used to running fast with free movements if it is trained on hard artificial tracks and roads.It is bad enough that the athlete has to race on such mediums: to me another illustration of how far intellectual decisions made by officials differ profoundly from the conclusions arrived at by serious experimenters and knowledgeable performers.The marathon man must watch that his musculature does not respond to his type of training by a shortening of his stride and the development of a restricted gate that almost completely inhibits the possibility of being a a free mover with commensurate high speeds." Comments by Percy Cerutty.
And you thought that running on the roads and hard tracks only caused undue stress on your knees? As a sidenote,years of running and training on hard surfaces also greatly increases your chance of having back problems.If you desire a long healthy running life you should make it a priority to seek out parks and courses that have hard packed dirt surfaces.
Perc's above comments were made in reference to marathon training.He wanted runners to be wary of the restricted,shuffling gait that is sonetimes adopted by athletes who do alot of long easy runs.It was his desire that marathoners run smoothly and efficiently,maintaining good form.
Interestingly,although written sometime in the late 50's,Cerutty had very definite opinions on who should and shouldn't run marathons.Again,keeping in mind the era and mindset of when this was written,he said those who run a marathon just to finish it "tend to make a burlesque of one of the toughest events in any sport any man can compete in." Whew!
Posted by Dave at 8:20 PM No comments: 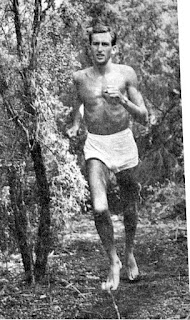 The following is an excerpt from an article written in Ultrarunning magazine many years ago by Gary Cantrell. In it he reflects on the changes he's observed in the road racing scene over the last few decades. I find Cantrell's observations insightful and humourous. What he wrote led me to think about how my view of runners and running has changed over the years. After the excerpt I will offer a few comments.

"There was a time,only a few decades ago, when those of us in the tiny running community used to smugly tell one another that running would never be popular---No one will be willing to work this hard but us---The running boom of the 70's disspelled that myth and changed the face of our sport.It seemed that the cozy, insider atmosphere evaporated and we were absorbed into the huge mass of newcomers.As the 90's kicked in, an excursion into sub-marathon racing is as disturbing as a visit to our childhood home. Once we were the masters of the sport, dispensing our hard-earned wisdom to eager novices. These days,the old-time runners are peculiarities, outcasts among the denizens of the sport we once called our own. The same people who found acceptance into the running community required nothing more than showing up and giving it a shot,now huddle in cliques with a dress code for acceptance. Battered racing flats that once bespoke a foot warrior who had paid his dues now draw stares of derision from those who spend over a dollar a mile on footwear. Faded shorts and moth-eaten t-shirts are ostracized among the tight little circles of polyester peacocks. Maybe I am too touchy but it is a little irritating for my baggy shorts to draw snickers from men who come to race in their wife's underwear.
It's ironic when I consider the running scene today that it has come to pass that the real running community of the 90's is just as small and just as isolated as that of the 60's.There can be no question that today's running is sterile and poor by comparison with that of the "good old days" Growth and progress simply do not always go hand and hand."
I understand what Cantrell is getting at here. He sees a running scene that has evolved and has lost some of the qualities that made it unique.Personally,I can't take going to road races that make me feel as if I'm in Times Square on New Year's Eve. Also,like Cantrell,I would not be comfortable wearing some of the "fashions" and accessories being worn in running circles these days. But, on a related note,years ago I used to think that if you weren't training like me then you were probably not a "real runner." It's funny how age changes the way you think, often times for the better. I believe anybody who runs regularly,be it at a 5 minute or 15 minute per mile pace,is worthy and legitimate as a runner.I remember what Percy Cerutty said after some of his athletes lead the charge up the sand dunes at Portsea, "You may run faster than me but never harder."
Posted by Dave at 7:33 AM No comments: