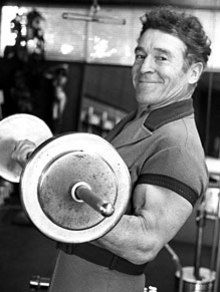 I recall years ago seeing an interview when fitness guru Jack LaLanne was nearing the end of his life.  I believe he was 93 years old, his mind was still sharp but he appeared somewhat frail. Not long after he died.
Then I read a question asked on a men's fitness site, why train? The reader's question was motivated by the fact that all our bodies are going to be overcome by the ravages of age so why bother? Whoever was moderating the site was so baffled by the question that he could only respond with "what a stupid question." Not a particularly substantive response.
I ask this question of everyone, why do you train?
What follows are a few excerpts from an essay called, Train For Honor by Jack Donovan. I found it to be very relevant and enlightening as it pertains to why we train. It is taken from his book, A Sky Without Eagles. It gave me a whole new insight into training, cutting though the superficialities and vanity that are so much a part of training and physical fitness. You may not agree with him but it will get you thinking.
Early in his essay Donovan asks: "why spend hours in a gym, lifting or training to perform feats that you will never really need  to perform to survive?"
He then acknowledges that his body is a "depreciating asset."
As far as exercising to stay healthy and live longer? Donovan states this is "a mediocre and uninspiring reason to get up and go to the gym every day." It reduces working out  to just "another chore."
And his opinion of those who work out primarily to "look good"? He writes: "It's a harlotrous reason to work out. It's basically saying that you spend hours every week trying to stay pretty. Being pretty may mean having big guns, a nice rack and a six-pack, but if you're only building that body to be 'hot', then you're basically no different than the strippers and aspiring trophy wives who are doing the same thing. Striving only to be desired is passive and effeminate."
Donovan does admit that training for "self-defense and to be more self-reliant" are reasons as good or better than the reasons given by most for training, but, he then reveals a deeper and more meaningful reason as to why he trains:
"I train for honor.

I train because I refuse to be a soft ambassador of this Age of Atrophy. And I refuse to be shuffling, slobbering, potato chip gobbling evidence of modern decay.
I don't train to be 'fit enough' for the modern world, or to gain the esteem of the average modern man. I train because somewhere in my DNA there's a memory of a more ferocious world, a world where men could become what they are and reach the most terrifyingly magnificent state of their nature.
I don't train to impress the majority of modern slobs. I train to be worthy enough to carry water for my barbarian fathers and to be worthy of the company of men most like them alive today.
Honor is a higher reason to train, a higher cause, a motivation above and beyond the routine and mundane. It's a better reason to keep going to the gym than mere narcissism or the fear of immobility, impotence and death."