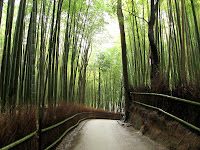 Another look at the meaning of the word courage with a dose of integrity thrown in.
Soko Morinaga had this to say about courage:

"I believe that courage is upholding what you have once decided to do and enduring all the troubles encountered along the way. To sustain and carry out that original intention--just this,in itself---is real courage."
Posted by Dave at 7:37 AM No comments:

A Few Comments From a Health and Fitness Pioneer

I have a picture of Percy Cerutty  and the man I reference below(Paul Bragg), as well as others at Cerutty's International Training Center at Portsea, Australia. Both men were quite similar in their beliefs, both were Health and Fitness pioneers. When I am able, I'll post that picture.

I first became aware of Paul Bragg in the early 70's. His health and nutrition books influenced me greatly. Exercise, natural foods and a healthy lifestyle was what he lived, preached and wrote about for many decades.
The great Jack Lalanne credits Bragg as being the one person who influenced him most in his life. What follows are some insightful comments by Bragg on all things pertaining to athletics, health and nutrition.

To those who believe 6 pack abs and a muscular body are signs of health, Bragg had this to say:
"Big powerful,bulging muscles do not necessarily mean internal health. The thousands who exercise daily but neglect healthful nutrition have no desirable record of longevity."

So true--as I have said in the past--too many people believe that just because they work out that gives them the right to eat and drink whatever they want as well as,as much as they want.

And as far as good,healthy types of exercise, weight lifting alone is not enough. However, when used in conjunction with aerobic and anaerobic training, it is ideal. Pick the training that will make you complete,ones that gives you muscular, respiratory, and circulatory stimulation. I am sure for most readers out there this is not exactly a revelation.

The key word above is discipline--if people would discipline themselves--- millions of dollars would not be spent on diet books that say they have 'the secret' to weight loss and the perfect body.
For those desiring more on Paul Bragg--here is the link to his Facebook page:
https://www.facebook.com/Paulcbragg/
Posted by Dave at 3:00 PM No comments: