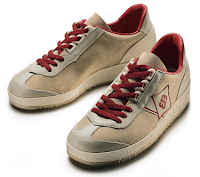 Those of us who live for the run and have been at it a long time tend to have our habits,rituals and quirks.You know,like when you see another runner at the park or the track and you find yourself looking at the kind of shoes they are wearing.I found myself doing this just last week,I was discreetly checking out this guy's shoes when he suddenly says to me,"those (Asics) 2160's your wearing were a good shoe." While were on the subject of shoes,the reason I still had a pair of 2160's is because I bought 2 pairs because they were bringing in the "new and improved" 2170's. Runner's tend to be very loyal to a shoe that works for them and want to have them around as long as possible.
Ah, the relationship a runner has with his shoes:
I won't mention names here but I know runners who won't even drive their car to a workout in their training shoes.
Then their is the extreme reluctance to discard the old ones.When their training days are over the shoes are relegated to casual, walking around footwear.
This all makes me think of race tee shirts,there are ones I've had for decades,they are worn at just the right race or training session. I told a younger runner who had asked me how long I had been racing,"This may sound like a cliche or something but I really do have race shirts that are older than you."
There is specific gear and apparel we wear to races as well as a certain kind of bag or sack we carry them in.
Perhaps alot of these quirks and habits exist because we distance runners are creatures of habit.I mean,don't we all have a pre-race routine? Don't these pre-race routines vary to some degree in relation to the distance to be raced? There is a distinct difference in the pre-race preparation before a 5k as opposed to a marathon.But either way,we have a specific type of routine we do before each race.I recall that prior to longer trail races I would always dilute a bottle of Twin Lab Ultra Fuel with water and eat a Power Bar 3 hours before the start.Speaking of Power Bars,remember when they first came out and you could only get them at Bike shops? I digress. Runners are very particular and specific as to what they eat and don't eat before a race.The same goes for what they drink.
Runners who have been at it for awhile and would be described as experienced are locked into the training systems they have followed for years. They are very unlikely to go with the hot new training system that's being touted.They'll tell you they've been around long enough and have seen them come and go, besides,they plan to stick with what works for them.
Similarly,runners have certain races they do year after year,they are the highlight of their racing season. I think of the Belle Watling Club in Buffalo where several members have gone to the Boston Marathon every year for 35+ years.
There's the social post race and post workout rituals, the "watering holes" where runners go and drink and tell stories,relive great runs,races and experiences.It's all part of what makes distance running so special,people who share a love for the purest of all sports,distance running.
Posted by Dave at 3:51 PM No comments:

From the Archives, pt.5---Sport's New Fundamentalists 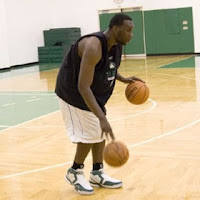 It's interesting how every sport has its fundamentals for learning and training. These fundamentals are basic to their respective sports and have been for ages. In running and other sports like weightlifting, stress is added to workouts progressively as the athlete becomes fitter. In sports such as basketball,baseball and football, how you throw,hit,catch and shoot has remained the same for decades.These fundamentals have not changed because they take into account the basics of anatomy and physiology. What follows was written sometime in the early '90's and inspired by some of the people of that time who believed they had a new and better way to train distance runners. The name of the author mentioned in the article you are about to read was changed around yet may still be familiar to some despite the change.

Sport's New Fundamentalists
" So you thought running was the only sport where advocates of new training systems and techniques existed? Wrong! Combing through coaching journals I found what I call the new fundamentalists existing in America's most popular sports,basketball,baseball and football. This month we'll profile a gentleman whose revolutionary approach to basketball is changing the sport as we know it.
Dr. Andy Owenson M.S.,P.H.D. is heralding a new way of dribbling the basketball, and that is by using both hands. Dr. Owenson believes the time for players from grade school to the pro ranks to adopt his technique is now. He says: 'studies have shown that utilizing just one arm in dribbling creates unnecessary wear and tear on the player's rotator cuff, using the Owenson technique avoids this plus athletes can actually maintain greater control of the ball.' After initial skepticism, Dr Owenson is beginning to receive wider acceptance of his technique. Two-hand Junior and Muny basketball leagues are cropping up all over the country. The good Doctor and his associates are going full-time with seminars and promotion of his book, A New Path Two Success."
I have found over the years that the introduction of a "new and revolutionary" way to distance training is always accompanied by the selling of books and seminars.It's interesting how these "new fundamentalists" make an initial splash,get the coverage in the running mags,sell alot of books,then a decade or so later they are pretty much forgotten.
Posted by Dave at 5:56 AM 3 comments: