Much has been written on nutrition over the decades. It's my opinion that, particularly in the last 20 years,there has been a lot of bad information masquerading as truth being promoted by people who are basically hustlers. Indulge me for a moments while I say a few things.
First off--I heard a speaker say one time that religion and nutrition were two areas where people could pass themselves off as experts yet possess absolutely no worthwhile credentials in their respective fields. Also, Adelle Davis wrote that people had a tendency to become fanatical about two things, nutrition and religion. I like her comment because I have seen people treat what they ate,and more importantly, what they didn't eat, with the same zeal a fundamentalist treats their faith.
Consider this analogy---Dave advertises that he runs a flight school and you want to learn how to fly one of those single engine planes. You come to my office and soon find out that I have not actually flown a plane myself but have read lots of books about it and have even operated a flight simulator. Would you then sign up for lessons from Dave the flight instructor? Of course you wouldn't,neither should you take advice from anyone simply because they claim to be a nutritional authority.
As a student of nutrition for around 40 years I may give you my opinion on what I think is a good way to eat but I believe it would be better if I told you what I have discovered in those 40 odd years  in the health/nutrition field.
Hundreds upon hundreds of books have been written by people espousing their particular slant on nutrition, diet and what you should eat. The majority of these writers possess little credible schooling and knowledge on the fundamentals of nutrition and human anatomy. Claims that writers experienced near miraculous results from how they eat does not validate the worthiness of that claim. In addition, many of these writers who say they have this training or these credentials may have a diploma but they are from less than worthy institutions.
Here's the skinny--people need to take account of their own health and well-being. Don't depend on someone who makes a living promoting a special way of eating to give you unbiased advice. Call me cynical, but it's the truth. The internet is a great place to read and study about the basics of nutrition and the human body. Just like there are the fundamentals of athletic training, there are fundamentals of nutrition; such as the body's need for complete proteins, water, plenty of fresh vegetables as well as quality fruits and grains. Oh yeah, one other thing, when someone tells you that a certain way of eating is the best or only way to go, ask yourself this: Through the ages, are there a people on this earth who have lived long vigorous lives following the particular way of eating this person is promoting?
Don't be one of those people who compromise their health because they've been fooled by a smooth talking hustler. It's all about taking initiative, doing the work yourself.
Posted by Dave at 11:11 AM No comments: 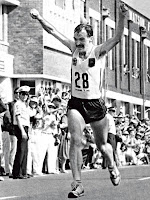 According to Arthur Lydiard there are eleven factors(elements) that determine how fast you will race.He writes"You must always be realistic and understand your limitations in running certain distances and,within that context,consider all the following principles,particularly that of basic speed."
Arthur writes:
"1.The athlete's basic abilities and development.
2.Basic speed or the ability to sprint.
3.Endurance
4.Ability to maintain a fast steady pace.
5.Ability to vary speed in a race.
6.The most suitable distance for a finishing kick.
7.Ability to exercise control during a race.
8.Consideration of opposing runner's abilities.
9.Ability to observe,assess and exploit any strengths and weaknesses in the opposition.
10.Ability to relate one's own weaknesses and strengths to the opposition.
11.Ability to judge pace.
My first thought on the above is that it takes an intelligent and well-conditioned runner to understand and implement several of the above elements.But,that's all part of achieving optimal running performances.
Another thing,you were born with a certain amount of speed,or lack of it.As I used to say to my students,the reason you are running distance instead of the sprints is because you don't have the natural speed. I could have you guys do wind sprints and speed drills all day and you would still not be able to race the 100 or 200.
The beauty of distance running is that you can become faster by doing the work,intelligent work, as Cerutty called it.I should add here that I'm not referring to endless sets of 400 meter intervals on the track.That's foolish work. You want to know yourself as a distance runner and implement some of the elements Lydiard is referring to? Then build up your aerobic base as far as you can, do it over varying courses,distances and terrains.Do fartlek runs, also, run the same courses each week as you build up your maximum aerobic threshold.You do this for a long time and you will know yourself as a runner,you will become highly conditioned,you will be able to switch gears as you run and race.
The beauty of distance training,contrary to what the nouveau running theorists will tell you, is its simplicity.
Posted by Dave at 6:17 PM No comments:

Determining Your Love For Running

The following came to mind during my last few runs. It is by no means the definitive indicator for everyone as to whether or not they love running. However, I believe there is a lot of truth in what you are about to read and if you go along with what it says, then it wouldn't be an exaggeration to assume you have a real love for the purest of all sports,distance running.In no particular order.....

1.This is strictly a hypothetical consideration: Although you would love the acclaim and success,you would not take a 10 year career of national championships that concluded with no further running of any kind OVER a lifelong ability to run. You like to compete but the prime motivation to run is your consuming love of the sport and the feeling you get while taking part in it.
2.You don't need to be with others to enjoy running. Sure, you enjoy the social aspects of running with friends on those easy Sunday 20 milers,but,you can enjoy it just as much running alone. I have known lots of runners over the years who've had a difficult time getting out there for any kind of running without having someone along with them.
3.You run without using an Ipod and earphones, you don't need them, in fact,you look forward to the quiet of a run. The reality of #'s 2 and 3 is that,to you, running is never boring.
4. You don't need to examine your shoes to know when it about time to get a new pair. Maybe this one means you've just been running for a long time but I thought I'd put it in anyway.Perhaps this exemplifies your preoccupation with running.
5.When you wake in the morning you already know where, when and what kind of run you'll be doing that day. With a holiday or special occasion coming up you make it a point to schedule a run ahead of time to fit in with the festivities.
6.As you get older you continue to run(and race) despite diminishing speed and performance. I know runners who have quit after reaching a certain age and their per mile average slowed. I agree with the great Jack Foster when he said, and I'm paraphrasing here, "I don't feel as if I'm running any slower as long as I don't look at my watch." If you love to run,what's the difference between running 6 minutes or 9 minutes per mile?
7.You continue to run despite others telling you,you should quit. You've just had your third meniscus surgery and the Doctor,your wife and friends tell you it's time to hang it up. This is not even a consideration because you know that it was a simple reparative surgery, it wasn't like you had a knee replacement or anything.The bottom line, a life without running is something you don't even like to think about.
8.This is kind of related to #7, you've tried other forms of physical exercise but none give you the feeling or enjoyment like the one you get while running.
Posted by Dave at 9:01 AM No comments:

The Three Prerequisites For Success

If you want success you must:

1. Nurture an unshakeable belief in yourself. Far too many people really don't believe they have the ability to reach the goals they set for themselves.
Why others? Why not you?

2. Have a supportive environment. The people who are closest to you in your life should understand that you feel a need to accomplish something that you believe is important. They may not be able to relate to what you are attempting, but they should respect the fact that you are committed to doing something. Strife in your personal environment is toxic, it can sabotage your quest for success.

3.Confidence that you know you have done the necessary work. If you are an athlete, it's the mental as well as the physical work.

Here's the thing, for those seeking success, you are always learning, always evaluating. You are not living like the average Joe who works, goes home, eats, watches the tube, goes to bed and then repeats the process the next day.
There is a purpose and a passion in your life.
Posted by Dave at 6:19 AM No comments: