Before I begin I should say that a better title for the following might have been--A Little Recent History of the Sotans, in the U.S.
Also, many have asked, just what does the word Stotan mean?  Stotan was created by Percy Cerutty, he combined the words stoic and Spartan. The word Stotanism encompasses his teachings and the way of life he advocated.


A Little Recent Stotan History
Back in the mid-1980's, Greg Walters gave me a Xerox that had a picture of Cerutty on it along with a brief description of what he taught and advocated.At the time we were both coaching at a Track and Field Invitational being held in Rochester, N.Y.I had never heard of Percy Cerutty before but was attracted to his message. Soon after I purchased a used copy of Athletics: How To Become A Champion and began following his dictates(as best I could). Trails and Parks took the place of concrete and tracks. I formed the Stotans, it grew and thrived, hardy turnouts were the norm at Chestnut Ridge Park. We raced with great success along the Finger Lakes Trails and other places.
The Stotans are still at it today. Although you don't have to be a member of "our club" to be a Stotan, you do have to believe and live Cerutty's teachings which are described fully in his many articles and books. Some of his essential teachings are: a highly conditioned mind is as essential as a fit body, a life can only be lived by doing, keeping all things natural and living for more than just having and 'getting' things.
I believe Cerutty's message is as relevant today as it was when it was first published decades ago. Taking a look around these days I'd say it's needed more now than ever.
It's always been my desire to get the word out on 'Perc' to as many people as possible. I'm very appreciative to all who have responded over the years. 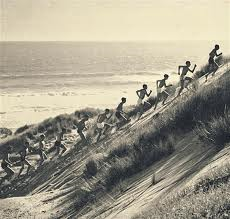 Perhaps the following would be most appropriate in referring to the competitive athlete.C.Al Huang wrote the following. The ideal athlete is:
"Individualistic.
Has the courage to risk failure,learn from setbacks and forge ahead.
Sees the event as a means to gain greater self-realization.
Knows his or her vulnerabilities and trains to strengthen them.
Sees success as one part of the process of sports.
Understands that performance is a roller coaster and has the patience to ride the ups and downs.
Enjoys the sport for the pleasure it gives."
The athlete who views his sport the way Mr.Huang details above is a thinking and sensitive person.Consider his reference to self-realization.You learn alot about yourself when you compete against others.Those who have seriously raced,or do so now,know what I'm talking about.You also become aware of your vulnerabilities and weaknesses along the way.
The runner who thinks his training and racing are strictly physical endeavors,something to push through with little thought,gain nothing in the mental and emotional departments.Consequently,this person loses out on the opportunity to grow as a person.
The ideal athlete knows failure and disappointment are part of the process,he expects it and deals with it when it comes from time to time.Who he is as a runner and a person is not determined by how he did at his last race(or workout).
The final entry says it all,"enjoys the sport for the pleasure it gives." The ideal athlete doesn't lose sight of that no matter how much success,or failure,he encounters.
The ideal athlete is a unique individual.
Posted by Dave at 6:18 AM No comments:

An Old Runner Reflects: Going Out My Way 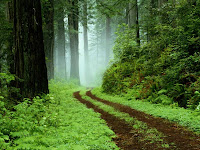 No slow decline or painful fade to black for me.
No,I want a night before filled with trading stories and drinking beer with my friends
Followed by a morning after run along an old forest trail under a misty overcast sky.
Let me feel that effortless glide as I go that only comes but once in a great while.
Just give me an hour,no make that two,as I cruise on down that increasingly dark trail
that will suddenly turn to light.
Posted by Dave at 7:02 PM No comments:

The Person Who Thinks They Can

As we approach the fall racing season most runners will reflect on the months of preparation done prior and consider their readiness for "the big race." One's mental and emotional state will go a long way towards determining if a runner will achieve their goal(s). There are certain moments during a race when fatigue or pain can raise doubt in our ability to reach those goals. Football coach Vince Lombardi uttered this famous quote that probably most of us have heard before but is worth repeating: "fatigue makes cowards of us all." If that isn't a quote applicable to running and racing I don't know what is. So,if we've done the preparation for THE race and the weather is not a factor, then what else do you think could potentially sabotage your race? You guessed it, it's your head,your mind,the way you think.The following by Walter Wintle may seem simplistic to some but it brings up truths that need to be considered before a race which you have spent countless hours preparing for.

The Man Who Thinks He Can

"If you think you are beaten,you are;
If you think you dare not,you don't;
If you want to win but you think you can't,
It's almost a cinch you won't.
For in the world we find
Success begins with a fellow's will,
It's all in the state of mind.
For many race a race is lost
Ere even a step is run,
And many a coward fails;
Think big and your deeds will grow,
Think small and you'll fall behind;
Think that you can and you will---
It's all in in the state of mind.
If you think you're outclassed,you are,
You've got to think high to rise,
You've got to be sure of yourself before
You can ever win the prize.
Life's battles don't always go
To the stronger or faster man,
But sooner or later the man who wins,
Is the fellow who thinks he can." 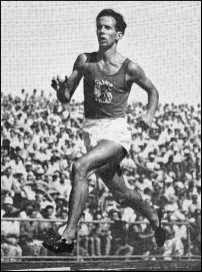 Aging,Athletics and Goals, It's More Than Just the Physical 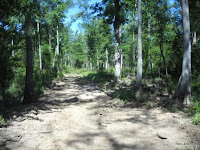 Eveyone tends to focus on the physical when it comes to aging and racing. I can certainly understand why. That's because we experience certain things while running and racing as we age and these things can't be ignored. Declining speed,the need for increased recovery time and a tendency to be more easily injured are a few of the issues that arise as we get older.
Every runner has a different age where they realize that they are no longer that seemingly indestructable runner they once thought they were.For many though,this realization comes as a surprise because as Ralph Waldo Emerson once wrote: "Within, I do not find wrinkles or a used heart,but unspent youth."
I'm sure I am like many of you older runners out there, I believe I can still hit times at certain distances that I haven't hit in years.
In looking back, when we were young athletes we had a fear of failure. Many runners can become preoccupied with this fear,it can cripple them as athletes.As we get older,two things often happen, one is that we feel we are  capable of accomplishing certain things but are afraid to try.The reason for this may be due to an unwillingness to discipline ourselves and do the necessary hard work.But,perhaps the big reason for not getting geared up to take another run at  personal athletic success is that we become cynical,we tell ourselves that it just isn't worth it.
The fact is, is that it is worth it. It is every bit as worthy as it was when we were youths. This passion we have for running should not be allowed to be effected by the passage of time and the new challenges that aging brings.The key is to never give up, realize that when you rise to meet the new challenges and all that comes with it,you then experience life to its fullest.
Posted by Dave at 6:00 AM 2 comments: 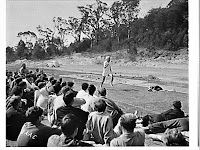 "The athlete,through being trained and practised properly,will find that the mind can dominate the physical body,and he can maintain an effort long after other competitors have abandoned all hope of holding the speed required to win." Quote by Percy Cerutty.
"Percy helped me to world records not so much by improving my technique,but by releasing in my body and soul a power that I only vaguely knew existed." Quote by Herb Elliott.
A strengthening of the mind and will should be the product of a well planned training regimen.
Posted by Dave at 12:01 PM No comments: